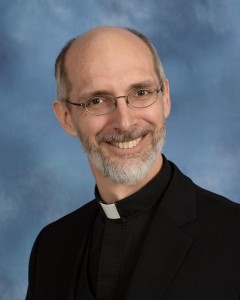 Do you not know that all of us who have been baptized into Christ Jesus were baptized into his death?  Therefore we have been buried with him by baptism into death, so that, just as Christ was raised from the dead by the glory of the Father, so we too might walk in newness of life. For if we have been united with him in a death like his, we will certainly be united with him in a resurrection like his. We know that our old self was crucified with him so that the body of sin might be destroyed, and we might no longer be enslaved to sin.  For whoever has died is freed from sin.  But if we have died with Christ, we believe that we will also live with him. (Romans 6:3-7)
Do you ever read the Apostle Paul, and feel a little confused? Does he often seem to be talking in circles? Maybe it has to do with Easter. Maybe it has to do with the Cross and the Resurrection.

Has your world been turned upside down? It should seem like it. Isn’t that what Easter is about? Death becomes life. The servant is the King. Sinners are forgiven. Easter is entirely unnatural and unexpected. Usually what has died is dead, and does not live again. Yet, Jesus is risen! Jesus is alive today! And this victory over death changes everything. Death no longer has the final say. And the love and grace of God are demonstrated for the world.

We need not fear death, evil, or sin.  God’s triumph is revealed in this simple phrase: Christ is risen! A blessed Easter to you and yours.
Paul and Silas … came to Thessalonica, where there was a synagogue of the Jews. And Paul went in … and on three sabbath days argued with them from the scriptures, explaining and proving that it was necessary for the Messiah to suffer and to rise from the dead, and saying, “This is the Messiah, Jesus whom I am proclaiming to you.” Some of them were persuaded and joined Paul and Silas, as did a great many of the devout Greeks and not a few of the leading women. But the Jews became jealous … and set the city in an uproar.  While they were searching for Paul and Silas to bring them out to the assembly, … they dragged Jason and some believers before the city authorities, shouting, “These people who have been turning the world upside down have come here also …. They are all acting contrary to the decrees of the emperor, saying that there is another king named Jesus.” (Acts 17:1-7)
Share this with your friends:

We are an Evangelical Lutheran Church of America congregation located in Janesville, Wisconsin.