[Romans 4] 13The promise that he, Abraham, would inherit the world did not come to Abraham or to his descendants through the law, that is through any action, but through the righteousness of faith or trust. 14If it is the adherents of the law, be they Jews or Judaizing Christians, who are to be the heirs, that is, those who are to inherit the Kingdom of God, faith is null and the promise is void, because faith is not an action of the law. 15For the law brings wrath, since all have sinned (Rom. 3:23); but where there is no law, neither is there violation.

16For this reason it, that is, salvation, depends on faith, in order that the promise of God may rest on grace and be guaranteed to all his, Abraham’s, descendants, because he is “the ancestor of all who believe” (Rom. 4:11), not only to the adherents of the law but also to those who share the faith of Abraham (for he is the father of all of us, 17as it is written” (Gen. 17:5), “I have made you the father of many nations [the Hebrew word “nations” in Genesis 17:5 usually indicates non-Hebrew people, also translated elsewhere “heathens” and “Gentiles”])—in the presence of the God in whom he believed, who gives life to the dead and calls into existence the things that do not exist. [Here Paul’s point introduces the example which follows, that point being: God can do the impossible.]

18Hoping against hope, he Abraham, believed that he would become “the father of many nations,” according to what was said (Gen. 15:5), “So numerous shall your descendants be.” 19He did not weaken in faith when he considered his own body, which was already as good as dead (for he was about a hundred years old), or when he considered the barrenness of Sarah’s womb. 20No distrust made him waver concerning the promise of God, but he grew strong in his faith as he gave glory to God, 21being fully convinced that God was able to do what he had promised. 22Therefore his faith “was reckoned to him as righteousness.” [To restate Paul’s example: Given Abraham’s and Sarah’s ages, it seemed impossible that they would have any descendant, much less a multitude. But God promises even what seems to us impossible. And God fulfills God’s promises, as demonstrated by the birth of Isaac. Abraham’s relationship to God (righteousness) is established by Abraham’s trusting God’s promise even when it seems impossible.]

23Now the words, “it was reckoned to him,” were written not for his Abraham’s, sake alone, 24but for ours also. It will be reckoned to us who believe in him, God the Father, who raised Jesus our Lord from the dead, 25who was handed over to death for our trespasses and was raised for our justification. [Hence, the extension of the argument to us: God promises us justification (being made right with God) and salvation through Jesus Christ. It would seem to be impossible for so many reasons. What makes the promise ours is trust in the impossible, trust in the promising God.] 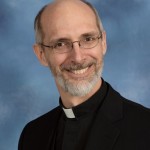 Above are my glosses on the Epistle reading from Sunday, February 25, 2018, the Second Sunday in Lent. (The italicized text is mine.) The pastoral application on which I would like to briefly reflect depends on recognizing the Promising God and the promises which God makes. Some have heard me talk about how Jesus, the one closest to God, in fact the Incarnation of God, endured temptations, trials, rejection, unjust arrest, suffering, and death. None of these things diminished Jesus’ relationship with the Father. Even when he prays in the Garden of Gethsemane for a different path than the cross and yet goes to the cross, even when cries out from the cross about feeling forsaken by God, God is there because God has promised (Jer. 31:33).

Abraham serves as another example. Although he was relatively rich, he endured hardship, trial and trouble, even while being in righteous relationship with God. Abraham is separated from his family when he leaves his homeland in Ur. His life is endangered in Egypt. He is frustrated in his desire to build a family. Abraham’s nephew is captured by a foreign king and Abraham must fight for his release. He only sees one of the three promises of God partially fulfilled in his lifetime. It was certainly not clear to Abraham how in him “all the families of the earth shall be blessed” (Gen. 12:3). Abraham does not possess the land in any significant way, even at the time of Sarah’s death; he has to buy a burial cave from the Hittites (Gen. 25:9, cf., 23:12f.). And of the multitude of descendants, he sees only a couple of sons, unable to conceive of the fulfillment suggested by Paul. But in spite of all of these impediments, Abraham remains faithful. God did not promise Abraham peace and tranquility, health and wealth, but rather, descendants, land, and through his blessings to all. That was enough.

We have been promised so much more through Jesus Christ. We often want additional things from God, and become frustrated, angry, and estranged when we do not get what we want. But has God promised health and wealth? When trials and tribulation and suffering and death enter into our lives, does that mean God does not love us and is not with us? Remember Jesus’ life.

Think about the Promising God, and the promises God makes. God promises justification and salvation. God promises right relationship with God. God promises our inheritance of the Kingdom of God. God promises eternal life. Are these not sufficient? Is it not enough to believe in these things? We can trust God even when the conditions of the world make God’s promises seem impossible. Paul’s point in the passage above is that it is by faith (trust) that we receive what God has promised. May the Holy Spirit of God work faith in you always through Jesus Christ our Lord, through whom the Father fulfills God’s promises.

We are an Evangelical Lutheran Church of America congregation located in Janesville, Wisconsin.